A roast sitting in a traditional oven will have a thin envelope of cooler air surrounding its surface. That is because the roast is absorbing heat from the adjacent layer of air. When a fan is added to the oven, circulating hot air strips the envelope of cooler air away from the roast replacing it with hotter air. That speeds up the cooking process. With liquids, convection is achieved simply by stirring the pot, or by allowing it to reach a rolling boil. 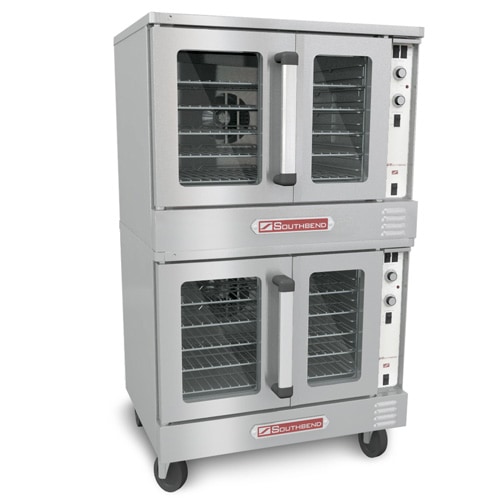 The convection oven is the most common example of convection cooking equipment in the commercial foodservice industry. The concept is simple. Begin with a traditional oven and add a fan to circulate the hot air. Over the decades, manufacturers have invested enormous amounts of research and technology into perfecting the original concept. Modern convection ovens outperform traditional ovens on nearly every level.

Convection ovens are great for most roasting and baking needs including meats, vegetables, casseroles, cookies, pies, and pizza. Convection ovens come in a wide variety of sizes from small countertop models to large floor models mounted on legs. They can also be stacked two high. A convection option is often available as an upgrade when purchasing a traditional range/oven.

There are numerous price points, features, and configurations to choose from. Some convection ovens feature multiple fans, or fans that change direction to improve performance. Controls may be analog or digital with the ability to preprogram recipes. A Kitchen Spot Expert can help you select the best model for your needs from manufacturers like Admiral Craft, Atosa, Bakers Pride, Globe Food Equipment, Hatco, Moffat, Southbend, Star, Vulcan, or Waring. 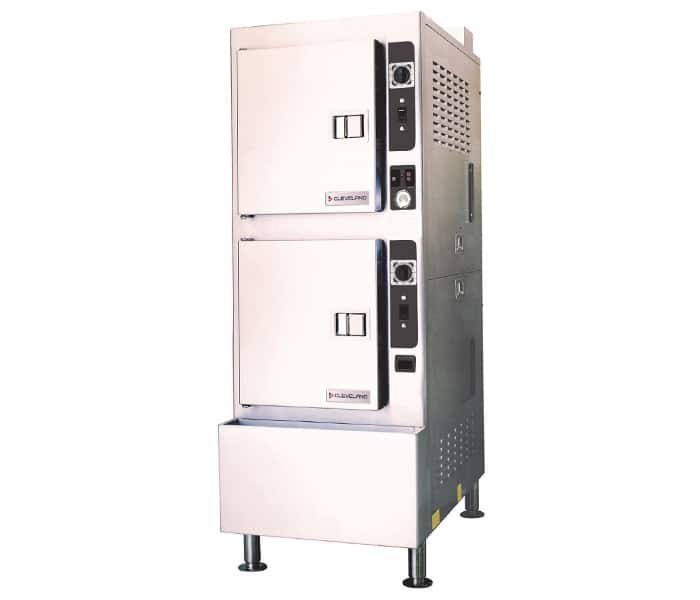 When water is superheated, it is converted to steam. Traditional steamers (a.k.a., “steam ovens” or “steam cookers”) use steam instead of hot air to cook food. Convection steamers operate on the same principal as convection ovens, only instead of hot air, they circulate steam around the cooking compartment.

Steaming has many benefits. Steamed food retains more nutrients, vitamins, and minerals. It does not burn, scorch, or dry out. It requires no additional oils or fats. Steamed vegetables retain their vibrant colors and fresh appearance. Convection steaming shares all these same benefits, but does the job faster.

Many convection steamers are boilerless. Rather than a boiler connection, they feature a pan of water in the base of the unit and an onboard generator that coverts water to steam. The pan of water may be filled and emptied manually, or connected to a filtered water source and drain. Convection steamers do not cook under pressure, so the doors can be opened to add or remove food at any time, with quick recovery after the doors are closed.

Convection steamers are ideal for batch steaming, poaching, stewing, par-cooking, rethermalizing, and thawing frozen foods. Like convection ovens, they are available in a large variety of sizes and configurations with numerous features and option. A Kitchen Spot Expert can help you select the best convection steamer for your needs from manufacturers such as Accutemp, Cleveland, Crown Steam, Hobart, or Vulcan. 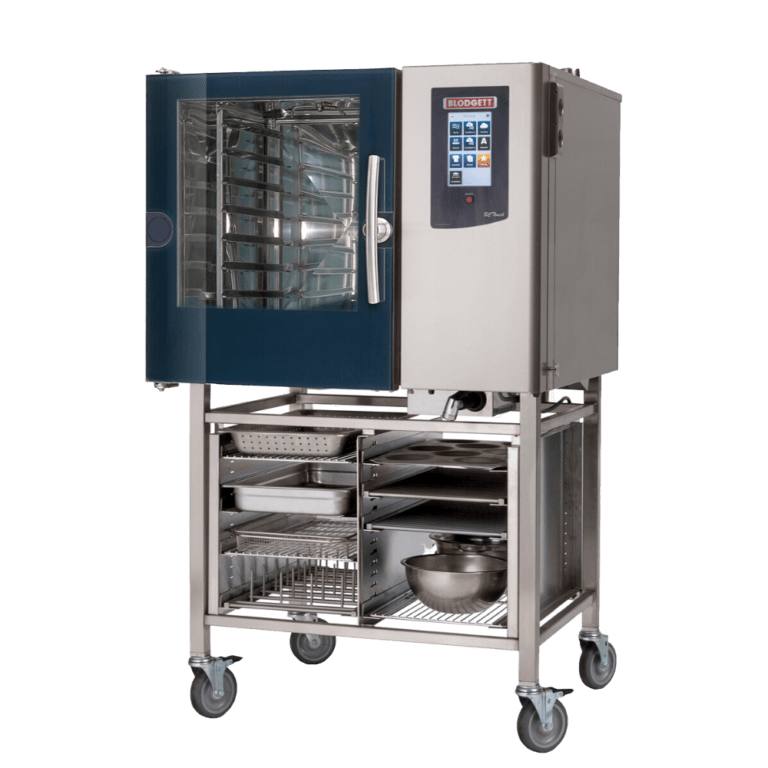 Combi ovens cook faster. By combining convection heat with convection steam, you can cook at higher temperatures without losing moisture. Combi ovens also provide higher yields because food retains more moisture and shrinks less. Combi ovens are extremely versatile because they do the work of a traditional oven, a convection oven, and a steam oven using a single piece of equipment. That frees up kitchen space and saves on the original cost of equipping your kitchen. Combi ovens are also 30% more energy efficient than traditional ovens.

Many combis allow for pre-programmed multi-stage cooking. A food pan full of scalloped potatoes, for example, might be baked rapidly using both convection heat and steam. Then the steam can be evacuated from the oven and the dish can be browned and crisped using just convection heat. Finally, the heat can be lowered to an appropriate holding temperature with just enough moisture to maintain food quality until the dish is ready to be served, or cooled and stored.

Combi ovens are ideal for baking, roasting, steaming, boiling, stewing, braising, poaching, rethermalizing, thawing frozen foods, and more. Like convection ovens, they come in a wide variety of sizes and configuration with many different features. Like convection steamers, they typically generate their own steam, but usually require a filtered water connection for cooking, an unfiltered water connection for cleaning, and a drain. A Kitchen Spot Expert can help you choose the best combi oven for your needs from manufacturers like AccuTemp, Cleveland Range, Convotherm, Market Forge, Southbend, or Vulcan. 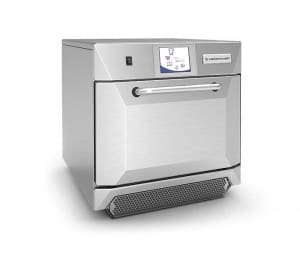 When the microwave is running, you still can’t use metal pans or utensils inside the cooking chamber, and the door remains shut to contain electromagnetic radiation, but most convection microwave ovens can be operated in convection-only mode. Additionally, as with any microwave oven, you’re typically limited to cooking one dish at a time. Still, a creative chef can produce an enormous amount and variety of food in a small space using a carefully selected convection microwave oven.

Convection microwave ovens often fall under the category of “speed ovens” and are frequently used to prepare individual fast-food items like hot sandwiches, individual pizza slices, or side dishes. With browning capability, they are also great for many bakery products like cookies and brownies. They are popular in theaters, convenience stores, stadiums, snack bars, kiosks, delis, and fast-food operations. Manufacturers include ACP/Amana, Merrychef, and Panasonic. A Kitchen Spot Expert can help you determine if a convection microwave is a good choice for your commercial kitchen. 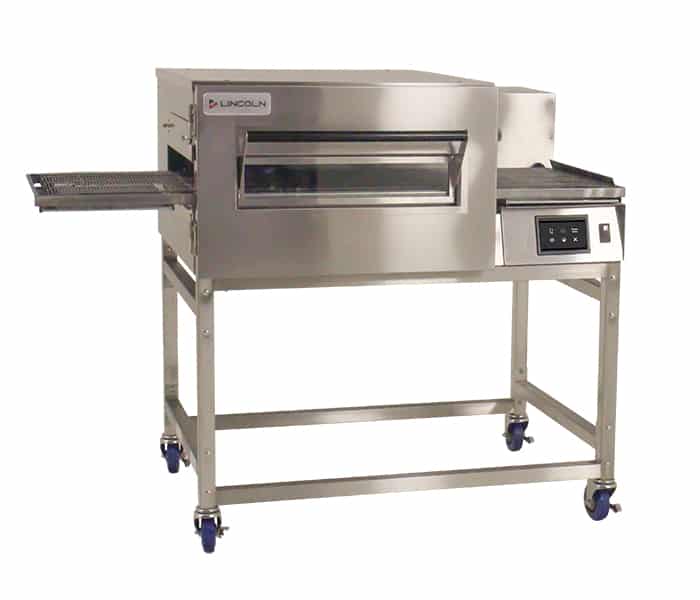 Impinger cooking is a specialized type of convection cooking. It is sometimes called “forced hot air cooking” because air is forced through a series of small air jets directed at the food. The pressurized hot air doesn’t just circulate around the food, it blasts the surface of the food for rapid heating. Impingement has traditionally been designed into conveyor style ovens. Food is seared from above and below as it passes by the hot air jets on a conveyor belt. Food items may sit directly on the conveyor belt or be placed on a pan or sizzle platter. The speed of the conveyor determines the total cooking time.
Impinger style conveyor ovens can cook a pizza four times faster than a traditional deck oven, and although they are a natural choice for takeout pizza operations, other possible applications include hot toasted sandwiches, nachos, breadsticks, cookies, seared seafood such as salmon and scallops, ribs, and more. Decks are stackable and available in a wide variety of sizes. A Kitchen Spot Expert can help you decide whether an impinger conveyor oven from manufacturers such as Lincoln are a good choice for you. Some manufacturers, such as MerryChef, have also incorporated impinger technology into their countertop speed ovens.

Sign up for promotions and specials on our best in class brands.