Well-known Charlotte, N.C., chef Larry Schreiber decided to go out on his own for the first time, in a hip new food hall space. He’d need everything any restaurant kitchen would—and it needed to fit in just under 650 sq. ft.

Bringing dealer Deacon Foodservice Solutions into the conversation early in the process delivered design guidance, the right equipment choices, a successful opening and a trusted relationship for the long term. 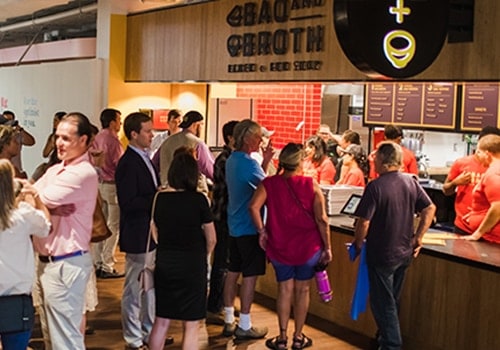 As the culinary leader of one of Charlotte, N.C.’s most successful restaurant groups, chef Larry Schreiber was a well-known commodity in his city. When developers put together a plan to open Optimist Hall, a combination retail/food hall in a former textile mill, he saw a chance to make his first foray into entrepreneurship. With backing from his restaurant group colleagues, Schreiber concepted Bao and Broth, serving ramen and steam buns.

For his equipment needs, Schreiber approached the experts at Deacon FoodService Solutions, a member of Pride Centric Resources and a longtime leader in the marketplace.

Start before the beginning.

“The first thing we talk about is: What are you making? What are you going to cook? What is your idea?” says Steve Dahl, vice president of sales for Deacon. “And then we can talk about equipment. What is everything you could possibly need to make that?”

Schreiber had worked mainly in full-service restaurants, and he sought as much capability in his small space as possible. “I basically wanted my stall to be self-sufficient,” he says. “At my former restaurant we were doing steamed buns, and I figured that would be a good fit for the food hall.”

“Equipment in small spaces is always an extreme challenge,” says Dahl. “And these are extremely small spaces. It’s all about the store frontage you get, and you have your little back-of-the-house right there. What you see is what you get, for the most part.”

Deacon sales consultant Mike Yerys started working with Schreiber right away, producing preliminary CAD designs. Yerys brings a wealth of experience to the job. The son of an architect, he studied some CAD design in high school and college and, more important, grew up in the area’s restaurant business.

“Getting in as early as possible really helps—I can draft specs and help steer clients in the right direction,” Yerys says. “We can take them to demonstration kitchens. I can show them five ovens and then they can figure out their menus and their flows and processes.” Schreiber provided what he calls “a general layout, totally generic,” and from there Yerys began developing layout options and specs.

‘That’s a real difference between us and our competitors,” Yerys notes. “They might outsource it. Yesterday I spent three hours in a client’s restaurant measuring his current place so we can build his next place. These guys looking at a set of plans might say, ‘I don’t know what I am looking at here. Walk me through this flow.’ So having that right in front of us is much better than saying, ‘Here’s a catalogue.’ That’s the value we provide.”

Focus on the core needs.

For this food concept, Schreiber needed to have an oven producing large batches of buns and plenty of space for making stock and noodles. The team decided on two pasta cookers, a range, a griddle and a Combitherm underneath a counter with a smaller hood on the side.

“It was a little challenging to get all the equipment in,” Schreiber says. “It took a couple of tries playing with the layout. But Deacon came in, unpacked all the equipment, installed it and made sure it was running.”

The best way to see what a restaurant really needs, of course, is to put in some time serving food. “We hand-washed dishes for probably two months,” Schreiber says. “I saw on day one that we would need [a dishmachine]. Finally I thought, we should get a machine.” Yerys brought in an undercounter product, installed under the drain board on a triple sink.

So far the only other adjustment has been to remove a prep table to create some cooling space. “That was something we switched out,” says Schreiber. “We had just one sink we could cool in, and now we have two. I can cool about 80 quarts at a time. We heat up pots throughout the day.”

Bao and Broth has been well-received by the public, and will likely only get busier as Optimist Hall grows. Schreiber says he would “like to expand the concept—multiply it. That’s my goal.” And he says he’ll absolutely use Deacon again. “I like to get involved,” adds Yerys. “It’s great to see everything working well.”

As the food product would be served almost entirely with disposables, the team initially installed a mop sink (“The only one in the food hall,” Schreiber notes) but decided against a dishwasher. A dual stock burner with a front and back eye can handle two 160-quart stock pots. A walk-in cooler, also somewhat rare in the food hall, is a huge advantage, especially given the brisk pace of service in the facility. During the week, the stall will see about 150-200 customers per day, a number which can climb to 500 on a Saturday.

“I basically work off the truck,” Schreiber says. “Food comes in, food goes out. I go through 30 pork bellies a week, and 1,000 pounds of chicken product. That’s bones and meat but still it’s pretty crazy.”

Find A Dealer Near You

Sign up for promotions and specials on our best in class brands.